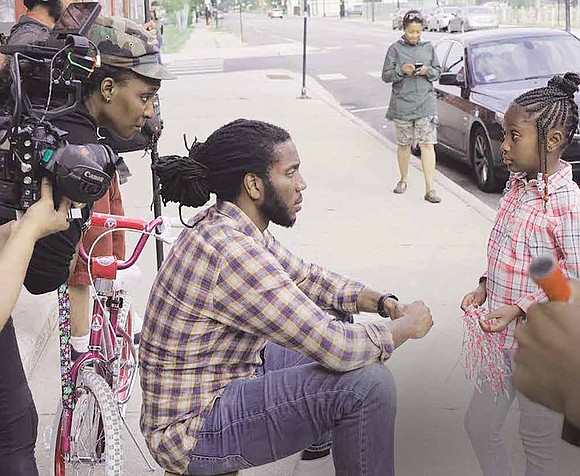 Sandrel Sanicole Young, a Chicago filmmaker, director and Columbia College graduate is currently working on a short film called “Training Wheels,” which is inspired by Young’s relationship with her father and is based on love, forgiveness, trust and family. Photo Credit: Sandrel Sanicole Young

Sandrel Sanicole Young, a Chicago filmmaker, director and Columbia College graduate is currently working on a short film called “Training Wheels,” which is inspired by Young’s relationship with her father, based on love, forgiveness, trust and family.

Young explained that a lot of African American men, like her dad, don’t like expressing their emotions or feelings about their livelihood, which sometimes strains child-father relationships. So, she created Training Wheels to highlight men being placed in a position that ultimately helps them become a better individual for their family.

“It took me time to understand my [father’s] struggles and understand that he couldn’t be what I wanted him to be,” Young said. “So, I had to change my attitude about my father and when I came into the knowledge of his struggles, I was able to be that [loving] person for him.”

She continued to say that having both roles of a mother and father is important for a child because each parent brings something different to the table and teaches on different levels of experience.

“The roles of a father and mother should never be taken lightly because they both go hand to hand,” Young said. “It’s about loving unconditionally and seeing past the pain that a parent may have caused and find out what could be the root of the pain.”

She says she hopes people think outside of themselves and make sure that if there is any misunderstanding, miscommunication or loss of love between a family member, they seek out information to understand the family members’ hardship and love beyond it.

“I think that is the biggest message of Training Wheels,” Young said. “We need to decide to be better people for our family members or parents who may be hurting and not only focus on the pain they’ve caused, but focus on mending the relationship rather than walking away from them.”

Young invested $5000 of her own money into the Training Wheels film project and recently launched an Indiegogo campaign to raise an additional $5000 for postproduction.

In less than one week, she raised her $5,000 campaign goal and was able to bring on Comedian Lil Rel as a producer. Young said the Training Wheels film will first run through the Film Festival circuit before being released to the public.

She continues to advise young aspiring filmmakers or directors to pick up a camera and begin filming what they find interesting.

“Even if you don’t know what the correct structure of film-making is, it’s always good to go out and experiment to find your voice,” Young said. “You won’t be able to find your voice until you actually go out and do it. So, go tell a story with your camera and shoot family members, friends, watch the film and do it all over again.”

To see the trailer to Training Wheels, visit https://igg. me/at/TrainingWheelsShortFilm.