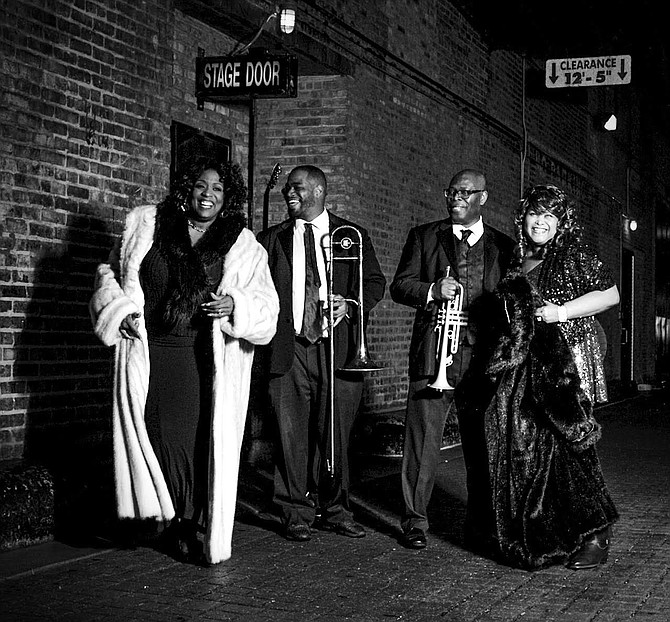 The production is directed by Kenneth L. Roberson and these award-winning entertainers will join forces in a fun and electrifying cabaret full of jazz, gospel, blues, musical theater tunes and bawdy hits with lots of sass, banter and hilarious inside stories that only these two Chicago power house divas can do. Tickets for Lettin’ the Good Times Roll go on sale on November 2 exclusively through Victory Gardens box office by calling 773-871-3000 or online at www.victorygardens.org. Ticket prices start as low as $15, and the production runs from December 15, 2017-January 7, 2018 on Fridays and Saturdays at 8PM, Sundays at 3:30PM and also features a special New Year’s Eve performance at 8PM.

These sassy dames, supported by a group of highly acclaimed musicians, will perform a repertoire that will have you rocking, reeling, laughing and shouting your troubles away. The cabaret will revolve around the decades of experience from the two songstresses as they perform a series of upbeat and powerful tunes representing their rich tapestry of celebrated performances that will entertain and inspire. Lettin’ the Good Times Roll exudes the energy that will draw the audience forward in their seats enjoying the rare opportunity to spend an intimate evening with some of the world’s best known talent.

This limited run will also include a special New Year’s Eve celebration hosted by the electrifying talents who are also great cooks. Following the December 31 performance, E. Faye and Felicia will usher in the New Year with a limited ticketed “After Show” party that includes special guests, DJ and dinner cooked by E. Faye & Felicia, themselves. Those very limited tickets are also on sale.

Felicia P. Fields recently performed as the voice of Audrey 2 in Little Shop of Horrors, and just completed a very successful run as the Associate Director of The Court Theater’s production of 5 Guys Named Moe. A Second City diva, Broadway actress and Tony-Award nominee for her role of Sofia in the Broadway musical The Color Purple, she also earned a 2006 Theatre World Award, Clarence Derwent Award, an NAACP Image Award nomination, two Broadway.com Awards, a Denver Post Ovation Award and was a Drama League honoree while reprising the role that Oprah Winfrey created in the film version of the same name.

Ms. Fields has a string of Goodman Theatre productions to her credit, including Crowns, The Rose Tattoo, The Amen Corner, Ma Rainey’s Black Bottom and A Christmas Carol. She has also performed in numerous productions at Marriott Theatre Lincolnshire, Chicago Shakespeare Theatre, Northlight Theatre, Drury Lane Oakbrook Terrace, Theatre at the Center, Apple Tree Theatre and has performed throughout the country in the musical Low Down Dirty Blues. Her on-camera, television and film credits include Sense 8, Who Gets the Dog (with Alicia Silverstone), Chicago Fire, and Kingfisher (with Chance the Rapper), Early Edition, Save the Last Dance, The Knights of Prosperity and numerous commercials and voice-overs. She has a day named after her in July bestowed upon her by Governor Pat Quinn.

Fellowship, Kathryn V. Lampkey Award, Rosetta LeNoire Award, The Guy Adkins Award for the Advancement of Music Theatre in Chicago and induction into the Women in the Arts Museum in Washington, D.C.

Seven much sought-after musicians from diverse musical backgrounds will play an integral role in delivering the authentic cabaret sound. With successful musical careers that have resulted in each of them playing with

top named headliners all over the world, these musicians were hand-selected to join Felicia and E. Faye for this spectacular production. All of the musicians currently reside in Chicago. They are:

 Frank L. Menzies, music director and piano/keyboards –has toured the globe performing and theatre credits include Oprah Winfrey’s The Color Purple, Dreamgirls and countless other performances. Frank currently serves as Director of Instrumental Music at Jones College Prep in Chicago and has recently toured as Music Director with vocalist Tina Brown.

 Jeremiah Hunt, bass – is one of the most sought after bassists in Chicago and has worked with Wycliffe Gordon, John Clayton, Gordon Goodwin, Rick Baptist & Ron McCurdy and producer Randy Jackson (American Idol) and released his first album with fusion funk group ‘The Main Squeeze’

 Charles R. Heath, IV, drums – is the drummer for piano jazz legend, Ramsey Lewis, and prior to that was the principle drummer for Oprah Winfrey’s & Quincy Jones’ first national tour of The Color Purple and has performed and recorded with Earth, Wind and Fire, Dee Dee Bridgewater and The Chicago Symphony Orchestra

 Rajiv Halim, saxophone – A composer and educator who has performed at venues and festivals around the world and has performed and recorded with artists such as Jennifer Hudson, The Four Tops, Martha Reeves and Chance The Rapper on Chance’s Grammy Award-winning album “Coloring Book”.

 Norman Palm, trombone – has shared the stage with music superstars such as Aretha Franklin, The Temptations, The O’Jays, Wynton Marsalis, James Moody, Kurt Elling among many others and studied at Roosevelt University.

The multi-talented Kenneth L. Roberson is director of Lettin’ the Good Times Roll.

Steve Abrams is the executive producer of Lettin’ the Good Times Roll. With more than three decades in Chicago’s diverse cultural landscape, Mr. Abrams’ celebrated career has taken him from the exciting nightclub and restaurant scene of the 1990’s through senior and executive leadership positions at Steppenwolf Theatre Company, The Harris Theater for Music and Dance at Millennium Park and Chicago Children’s Theatre. He has served as the first resident artistic director for Navy Pier, pioneering its newly formed arts and discovery programming to solidify Navy Pier’s role and prominence as the town square of Chicago’s cultural district. Mr. Abrams has created, produced and collaborated on numerous projects with luminaries such as Stephen Sondheim, Jennifer Holliday, Fran Lebowitz, Alan Cumming, Kathleen Battle and John Waters, as well as with many of Chicago’s top artistic organizations