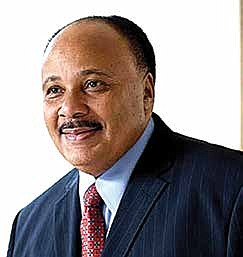 the 2017 Lifetime Legacy Award during the group’s annual conference held on June 20-24 at the Gaylord Convention Center at the National Harbor in Prince George’s County, Md.

As the oldest son of Dr. Martin Luther King, Jr. and Mrs. Coretta

Scott King, Martin Luther King III serves as an ambassador of his

parent’s legacy of nonviolent social change. In 1997, King was elected as the fourth president of the Southern Christian Leadership Conference (SCLC) where he co-sponsored the 40th Anniversary of the historic March on Washington.

the Dream, which focused on redressing poverty by strategizing

with community organizers to ignite investment in the local

neighborhoods and foster peaceful coexistence within the U.S.

“For decades, more than anyone else, Martin Luther King III has continued to personify and represent the living legacy of Dr. Martin Luther King Jr. for freedom, justice and equality,” said Dr. Benjamin F. Chavis, Jr., the president and CEO of the NNPA. King accepted the Lifetime Legacy Award on Friday evening (June 23).

On Tuesday, June 20, the NNPA kicked o¢ the conference with the

The conference also featured a panel discussion about the documentary “Pardons of Innocence: The Wilmington Ten”; a conversation with NNPA members who operate publications

that are more than 100 years old; and a presentation by the Nissan Foundation on 25 years of community service.