GROUP HELPS OTHERS TO STOP TRUMP 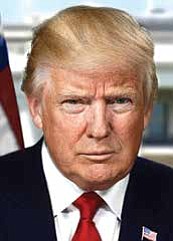 GROUP HELPS OTHERS TO STOP TRUMP

The 2016 election has more than 65 million Americans scratching their heads and many are left with feelings of fear, anxiety and anger.

Hate crimes against Muslim Americans and African Americans are on the rise. The swearing in of the 45th President of the United

States has taken place and yet half of the country has not been able to accept the idea of Donald Trump as the leader of the free world.

President Donald Trump has spurred a movement of individuals who vehemently oppose his presidency.

‘Indivisible: A Practical Guide for Resisting The Trump Agenda’.

This guide is a literal ‘how to’ resist Trump and those who would support and push his agenda through congress.

In the introduction of the guide it states, “Donald Trump is the biggest popular vote loser in history to ever call himself President- Elect. In spite of the fact that he has no mandate, he will attempt to use his congressional majority to reshape America in his own racist, authoritarian, and corrupt image.”

Sarah Dohl, one of the authors of the Indivisible Guide said, “Our core mission is to adopt key tactics of the tea party to effectively resist the Trump agenda”. The Tea Party is an ultra-conservative sect of the Republican Party and a movement that was birthed with the purpose of obstructing the Obama presidency. The Tea Party organized quickly and

efficiently, successfully winning many seats in congress. The

guide laid out the Tea Party’s two strategic choices; they were

locally focused and they were purely defensive.

“We want to inspire people to organize with friends and

neighbors,” said Dohl. The guide asks people to do more than

sign petitions and make calls, “If progressives are going to

stop this, we must stand indivisibly opposed to the Trump

and the members of Congress who would do his bidding.

power to win.” Dohl says that she and the other co-authors

of the guide are just an ‘exhausted group of volunteers’ who

strategies and tactics on how to protest and organize. The

one difference between the strategies that are a goal of the

‘Indivisible Guide’ and the Tea Party is the legislative power

the Tea Party acquired by putting forth candidates to run for

various seats in congress. “ We believe that the next four years

depend on Americans across the country standing indivisible

against the Trump agenda. We believe that buying into false

promises or accepting partial concessions will only further

empower Trump to victimize us and our neighbors.” The

who need to know their rights and protections under the law.