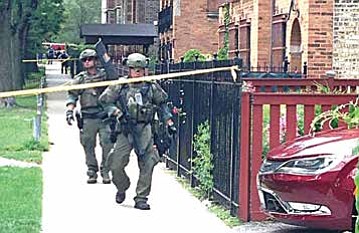 Lazare filed a Freedom of Information Act (FOIA) request on April 15, 2017 for “all formal and informal critiques and incident logs for SWAT incidents from Jan 1, 2009 to December 31, 2013,” according to a Cook County Circuit Court document. But after multiple FOIA requests, CPD reportedly only sent some of the SWAT responsive records and reportedly failed to include Hostage Barricade Terrorist (HBT) logs from 2009-2012.

Since 2012, half of Chicago’s 12 mental health clinics have closed and the remaining six have been privatized, according to a Loevy & Loevy Attorneys at Law press release.

Lazare and Southorn wrote in an article published by The Intercept, “Since 2013, Chicago police have deployed SWAT teams at least 38 times

to respond to mental health incidents and suicide attempts,” as revealed

by records produced in response to a previous FOIA request.

Some of the recent civilian killings by Chicago’s police included Laquan McDonald, who was diagnosed with post-traumatic stress disorder. Other killings included Northern Illinois University (NIU) student Quintonio LeGrier, who was involuntarily admitted into a psychiatric hospital, and Michelle Robey, who was diagnosed with bipolar schizoaffective disorder, according to attorneys at Loevy & Loevy.

as a result,” Lazare said. “Now, you have people caught in the cross care of

Lazare continued to say that Chicago needs to build a society that doesn’t respond to public health problems with punishment and oppression, but instead with mutual aid to provide everyone’s needs.

in,” she asked? “Do we want to live in a society where we provide for the

health care needs of all people, especially ones who are marginalized, vulnerable and oppressed? Or do we want a society that is increasingly

becoming brutally heavy handed in police responses to problems that are

they are waiting for the city of Chicago to confirm the official court date.

Lori Lightfoot, president of the Chicago Police Board, declined to