THE BLACK PRESS SHOWS RESILIENCE OF THE BLACK COMMUNITY 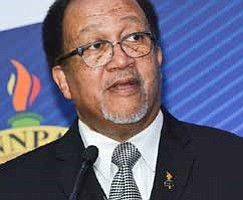 Dr. Benjamin F. Chavis, the president and CEO of the NNPA, said that the “NNPA continues to represent the resilient, trustworthy tradition of the Black Press that is indispensable to Black America.” This photo was taken during a 2016 Black Press Week in Washington, D.C. (Freddie Allen/AMG/NNPA)

THE BLACK PRESS SHOWS RESILIENCE OF THE BLACK COMMUNITY

For 190 years, the Black Press has chronicled the spirit and resilience of the African-American

“You can see it in the spirit of the process that we have [developed] in documenting our history— we are marvelously resilient by nature, we are street fighters, guerilla fighters and resilience defines us,” said NNPA Foundation Board Chairman Al McFarland.

The National Newspaper Publishers Association (NNPA), a trade group of more than 200 Black owned media companies in the United States, also known as the voice of the Black community, has

been the repository of Black history for generations, capturing that spirit and resilience through

Dr. Benjamin F. Chavis, the president and CEO of the NNPA, said that the strength of the Black

Press has been widely demonstrated through decades of change.

“Since 1827, the Black Press in America has been on the frontline of publishing in the interests of freedom and justice,” Chavis said. “Today, the NNPA continues to represent the resilient, trustworthy tradition of the Black Press that is indispensable to Black America.”

Rosetta Perry, publisher of the “Tennessee Tribune” in Nashville, said that even though millennials aren’t reading traditional newspapers as much as past generations, news organizations in the Black community—including newspapers, radio stations, magazines and websites— are working together to ensure that critical information reaches the masses.

“There are many stories about Black people both domestic and international that the mainstream media ignores or underplays,” Perry said. “The Black Press cannot afford to be silent or not be certain to get the word out about them, whether it’s voter suppression or

In 1973, Howard University, a historically Black institution in Washington, D.C., collaborated with the NNPA, to establish the Black Press Archives at the school’s Moorland-Spingarn Research Center.

records related to the Black Press. Black newspapers are also collected and preserved there for scholars, students and the public.

While some think that the Black Press is no longer needed, they need only to look at the

newsrooms of the mainstream press—newspaper and television—and see that when pressured after the Civil Rights Movement, they hired more Blacks,” in the past than they do now said Dorothy Leavell, the outspoken publisher of the award-winning Crusader newspapers in the Chicago area.

Leavell continued: “And, most said the Black Press wasn’t needed. While they were employed, the Black reporters were not given the freedom to report stories as they existed, often White editors changed the story with headlines that fit their perspective, not the essence of the story, if some of them recognized their stories as submitted, it was rare.”

they mostly remained silent. Many now want to speak up as their numbers are dwindling.

“The Black Press is driven by a purpose and a mission to tell the truth and to stand up to those who would rob humanity of its fullness,” McFarland said.

“We stand to call attention to the truth of our existence and to the commitment of freedom and liberation. Our spirit is underlying in our newspapers; we are resilient and we no longer have to see ourselves through the lenses of Europeans.”

McFarland added, “There’s a new narrative that says we have been winning and we are winning.”