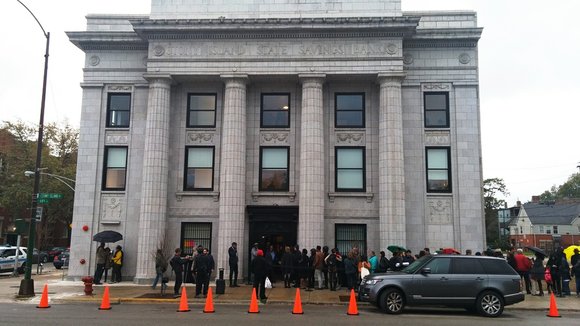 The Stony Island Trust & Savings Bank, a longtime staple of Chicago’s South Shore neighborhood, recently reintroduced itself under a new name to another generation of residents.

Theaster Gates bought the Stony Island Trust & Savings Bank building from the City of Chicago for $1 in 2012.

Thanks to local artist Theaster Gates, who bought the building from the city for $1 back in 2012, and the Rebuild Foundation, the Stony Island Arts Bank, will serve as a space for neighborhood residents to preserve, access, reimagine and share their heritage - and a destination for artists, scholars, curators, and collectors to research and engage with South Side history.

The Stony Island Trust & Savings Bank, originally designed by William Gibbons Uffendell and built in 1923, was a community savings and loan. But by the eighties, the branch had closed and the building remained vacant, deteriorating for decades. Gates, the Artistic Director of the Rebuild Foundation, told the crowd that the Stony Island Arts Bank could once again beome a beacon in the community.

“The Stony Island Arts Bank is a reminder that beauty can live anywhere. Even at the corner of 68th and Stony Island,” Gates says. “We should all know that buildings don’t build themselves. We all put skin in the game to make this happen. What has become very clear is that now the city knows that the south side has a gem that’s just as good any other in the city.”

The bank will also serve as a platform for site-specific commissions and exhibitions, a venue for artist and scholar residencies, and a home for the foundation’s archives and collections. For instance, the records of House Music pioneer Frankie Knuckles is housed on the building’s third floor. Also, the Johnson Publishing Company Library, on the second floor, houses many of the books of Ebony/Jet Magazine founder John Johnson.

Chicago Mayor Rahm Emanuel attended the opening reception saying that Gates is one of the few local successful artists who remained in the community.

“Many of the artists who make it out of Chicago, leave Chicago because they don’t think Chicago is big enough for them,” Emanuel says. “The world knows about Theaster’s work so the good news is that Theaster has not left the City of Chicago and the city is richer for it.”

Leslie Hairston, alderman of the city’s 5th ward echoed the mayor’s sentiments by saying the Stony Island Arts Bank can be a catalyst in the South Shore community.

“I think this is great space for learning and learning about our history. What was it like when this bank was open,” Hairston said. “Look at the Johnson library. Students can come in and learn about journalism to see what that takes. And the Frankie Knuckles Collection. Music touches everyone’s soul. It’s a grand indication of how grand Stony Island was.”

South Shore resident Kashairah Gardner brought her one-year-old daughter Alliyah, to check out the festivities. She says the she plans to bring her daughter out to future workshops at the bank.

“It’s kind of cool so far. I’ve always noticed the bank but I had no idea there was going to be art here. I really like what they have done with the place,” Gardner said. “It looks really nice. They are going to have workshops for the kids, so I will be back. They will keep a lot of us busy. This is a nice thing to have in the neighborhood.”

South Shore resident Caleb Harris loves what he saw at the opening reception. However, he admitted to having mixed feelings on what it may bring into the neighborhood.

“I think it’s good, and bad. I know for sure that the museum isn’t for the constituents in this neighborhood,” Harris says. “The interest wasn’t there, so you have something else that is coming as far as gentrification. I’m afraid that people in this area may not know what exactly this means.”

Harris went on to say “when bringing this into the area, businesses start to pop up if they haven’t already. Look at the Starbucks. That’s not for us. That’s for the person who was smart enough to buy early. The University of Chicago is expanding and it’s going to be crazy.”

The Stony Island Arts Bank is scheduled to open to the public on this week.