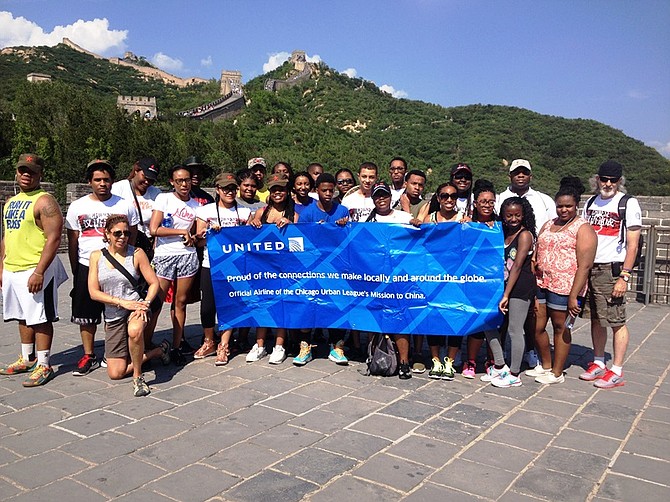 The Chicago Urban League’s Student Mission to China gives African American youth from underserved communities a global perspective on their lives and communities and empowers them to see themselves as part of a global community.

Established in 2008, the China-United States Exchange Foundation is a privately funded non-government, non-profit entity which serves as a bridge between the two countries by facilitating open and constructive exchange of ideas.

CUL believes that the voyage to China will inspire youth to become civic, political, and social change agents.

The roundtrip airfare cost to China is fully sponsored by American Airlines.

“For the third year in a row, the Chicago Urban League is partnering with United Airlines and the [China]-United States Exchange Foundation (CUSEF) and it was an initiative that set out to create better relationships between the United States and China particularly with the youth,” said Lauren Love, manager of external affairs for Chicago Urban League.


CUL's goal was to raise $15,000 by May 27. To date, CUL has raised a total of $17,815, exceeding its target by nearly $3,000. The donations will cover passport and visa fees, travel insurance, pre-travel leadership training, meals and student stipends.

"Large donations are great but that isn't always our expectations particularly from the community,” said Love. “We're looking at a very grassroots kind of effort. We are looking for grandmothers, uncles, aunts, members of your church/school, to give small amounts of money but in mass quantity."

Students chosen to attend the China trip were asked to provide a copy of their academic transcript and, along with their parents, submitted to interviews with the CUL executive management team and CUL board members.

CUL leadership and parent volunteers will chaperones the students during the excursion. Chicago Urban League Education Director Danielle Parker has traveled with the students each year. Last year, Zopp traveled to China as well.

Students and parents interested in traveling with the Chicago Urban League to China should visit http://www.thechicagourbanleague.org/site/default.aspx?PageID=1

To give a donation visit https://www.indiegogo.com/projects/2015-chicago-urban-league-student-mission-to-china.