Street Naming in Honor of the Late, Jacoby Dickens of Seaway Bank 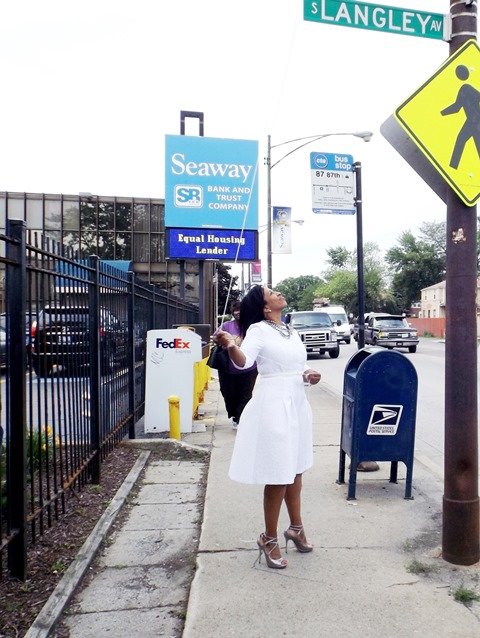 Chairman Dickens thanked her board of directors, her bank president and CEO, Darrell Jackson; Chicago aldermen, Chicago Mayor Rahm Emanuel and Chicago Deputy Mayor Steven Koch. She added that the bank would not have survived the economic downturn if not for the support of Chicago Ald. Edward Burke (14th Ward) and that she’s received a wealth of advice from Koch and the mayor’s office.

“If Jacoby were alive today, he would say, ‘Happy Holiday!’ as June 19th is the late chairman’s birthday and also Juneteenth Day, the annual observance of when Union soldiers enforced the Emancipation Proclamation and freed all remaining slaves in Texas on June 19, 1865.”

Displayed on the same street sign pole, along with the green 87th and Langley, street names, Jacoby Dickens Way, the brown street name, is located just above them.

The chairman went on to describe what her husband meant to the Chatham community.

“You can live your life the Jacoby Dickens way by educating a child, supporting small businesses and also by supporting the largest black-owned bank that is chaired by Jacoby’s successor... I’m not ashamed of promoting Seaway Bank as a black-owned bank. Many of you know that without a bank like Seaway, you would not have gotten your start…”

WVON Radio talk-show host, Perry Small, broadcast her midday show live from the event held in the Seaway Bank Parking lot located across the street from the bank at 87th Street and Langley in Chicago, festively decorated and filled with event goers and food trucks.

“I’ve been a customer of this bank and have been turned down for a loan from this bank,” Robinson said lightheartedly to the audience. “Jacoby was like a father to me…he had a big impact on this community, was wildly respected and also had a political impact on the community. A bigger street should have been chosen for the dedication…say perhaps the Dan Ryan Expressway…”

Chicago Deputy Mayor Steven Koch, who stood in for Mayor Emanuel, read a letter on behalf of Emanuel saying that Jacoby was an inspiration for many, made an indelible impact on Chicago, and played an integral role in seeing to it that thousands of students were able to get an education, especially those attending Chicago State University.

“There’s no better way to honor him,” Koch said.

“I’m delighted to be here to celebrate a true legend,” Burke said. “I’m proud of my association with Jacoby and now with his lovely bride and Darrell Jackson, who’s now leading the bank.”

Chicago Ald. Michelle Harris (8th Ward) said, “I’m honored to be part of history. To his wife who has stepped into his shoes, I wish many more years of success. This street naming should have taken place when (Jacoby) was still alive,” Harris said to applause.

Ald. Roderick Sawyer (6th Ward) said Jacoby Dickens was synonymous with the Chatham community and said he considered it an honor to take part in the dedication.

“Seaway Bank has been a great institution for this community,” Sawyer added.

Dr. Mahalia Hines, mother of award-winning rapper, Common, was also on hand for the event.

“I’m a longtime Seaway customer and Common got his first bank account at Seaway Bank when he just ten years old,” Hines said.

Chicago State University President, Wayne Watson said, “I would not be where I am today, if Jacoby Dickens was not who he was yesterday.”

Historian, Timuel Black was in attendance and said of the street naming, “It invigorates and informs the community, socially, economically and politically.