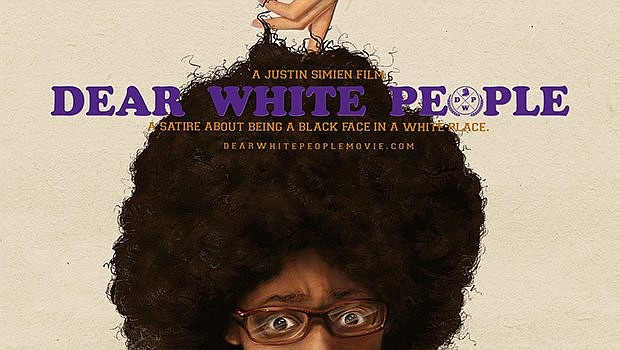 Dear White People satirizes on the black experience in a “post-racial” society.

“Dear White People, the minimum requirement of black friends to not seem racist has just been raised to two. Sorry, but your weed man Tyrone does not count,” is just one of the many funny and sly statements said by campus radio host Samantha White (Tessa Thompson) as she addresses the issue of race on campus and in her own life in the clever film, Dear White People.

Reminiscent of Spike Lee’s School Daze about black college life, Dear White People is a provocative satire on the black experience in a “post-racial” society during the age of Obama. Written, directed and produced by Justin Simien, the film follows a group of African American students (starring a cast of relatively unknown actors) as they navigate campus life at the fictional and predominately white Winchester University, while grappling with race, stereotypes and identity.

These issues are quickly pushed to the forefront when a riot breaks out on campus over an annual Halloween party’s creation of the theme “unleash your inner Negro.”

Winner of the 2014 Sundance Film Festival’s Special Jury Award for Breakthrough Talent, Simien earned a spot on Variety’s annual “10 Directors to Watch” for his feature film debut. Prior to directing the film, Simien worked as a publicist and marketing specialist for Paramount Pictures, Focus Features and Sony Television.

Promoting the film on a nationwide college tour recently, Justin Simien was in town and spoke to the Banner about the making of Dear White People and the black experience.

What was the inspiration for Dear White People?

Justin Simien: Just my life. In particular my senior year in college having gone from the culture shock of leaving Houston, Texas for Orange County where I went to college. I was having these conversations with my other black friends about toggling, and how different we answer the phone depending on who’s calling. And, are we hanging out with this group of friends because we’re black? Are we hanging out with that group of friends…? Why are we keeping them separate? We were just having these really funny conversations and I was wondering, ‘Why aren’t these out there in the culture?’ Why aren’t more people talking about this? This is all of my friends’ black experience but particularly in 2005 and 2006, the latest black TV shows and black movies didn’t really reflect us and what our generation was going through. That’s really where the beginning of it came from and also I just really loved that there was a black art house in the late ‘80s that had reached the mainstream and it had completely evaporated by the time I was in college. I wanted to do something in that vein and that’s really where it came from.

The film is definitely reminiscent of School Daze, I’m Gonna Git You Sucka and Hollywood Shuffle because they were able to comment on society with humor and they were really clever.

JS: It’s nonexistent in film that you have a black comedy that strives to be satire that strives to be social commentary. We’ll do parodies every once in a while. You’ll have this sort of rom-com thing but something that really strives for the art house sensibility and the art houses — that’s a weird word nowadays — but strives for that sensibility. This is a movie that intended to say something, to leave you with something to talk about in the lobby. It’s very rare to find that about black people, about black characters.

It’s easy to find that with the recent movie, for example, This Is Where I Leave You which has a great cast and is a great movie. Why aren’t there more films like that, that represent a more rounded black experience?

JS: I’ve said this before, that those kinds of movies are meant to speak to the human condition. It’s unfortunate that in the marketplace movies that speak to the human condition so rarely have black characters in them or black actors or anybody black in the world. That has a subtle way of suggesting that our experiences aren’t as important and that when it comes to matters of the human condition our experiences and stories are irrelevant to that conversation. Those are the kind of more covert ways that I think culture sort of suggests things to black people about their identities that I think are harmful.

What does it mean to you when you hear about the black experience and identity?

JS: For me it’s been constantly sort of bobbing and weaving other peoples’ presumptions of me because I was never the right kind of black person. My family was Creole and so my understanding just the skin tones of blackness was already very different from what was kind of out there in the culture. My concept of blackness was just not ever the same as mainstream blackness. My mom was really into education and we listened to pop music and then I listened to alternative music. I never was able to properly emulate. When I grew up, the sort of gangsta culture was in vogue. You had kids from really good neighborhoods walking around with a limp. I never did it right. I found I was always sort of “blacking it up and blacking it down” amongst black people and white people. That’s just the way I came up and out in the world. So I think that’s definitely had an influence.

Your film seems like it might have led the way for the new TV show Blackish, which talks about the same issues of what it means to be black, the black experience. Do you think the timing of where we are right now politically is right for this conversation?

JS: I think it’s in the Zeitgeist now. I started in 2005. I don’t know when the creators of Blackish started and I don’t necessarily think one has to do with the other. It’s funny how people start to think about things and it takes so long to develop these projects and it’s impossible to say. It happens in Hollywood all the time. I feel fortunate about it. I think TV has always been a little ahead of the curve too, particularly on this issue, starting with the Dave Chappelle show, the Boondocks, and Key & Peele. Black satire has found a place in television. But film is sorely behind. It’s great that we had a year of black films but Meryl Streep can get an Oscar for playing anything. She doesn’t have to play a tragic role where she dies at the end or is striving at the end. I can’t wait for the time when black actors and black directors and black writers are getting awarded for important movies that have nothing to do with the tragedy of the black experience. That’s when I think things will change a bit.

What do you hope people take away from watching this film?

JS: I love after-movie conversations in the lobbies. I know race will be on people’s lips. The thing that I want people to take away is, you know, ‘Who am I?’ ‘What are the ways in which I have short-changed who I really am to get ahead in life or to meet the demands of other people?’ or ‘What are the ways that culture has sort of brainwashed me?’ That’s what I want people to talk about. ‘Isn’t it interesting I saw myself (whether you’re black, white or whatever), in a movie that featured people of color, and I felt something about the human condition in a movie that featured people of color.’ And, ‘Maybe movies with black and brown people in them and women as the leads, maybe they do have a spot at the table.’ Those are the kinds of things that I ultimately want them to take away.

Have you started thinking about your next project?

JS: I am in Dear White People land a bit. The book is really important to me. I want people to pick it up and tell me what they think. I think the characters belong on the small screen ultimately. I’d love to continue their adventures in a different medium. And beyond that, I’ve been writing for some time now so I have a few screenplays, and I’m writing a new one, and I’m attached to some other things. I want to keep telling people stories that leave people feeling a certain kind of way.

Courtesy of The Bay State Banner