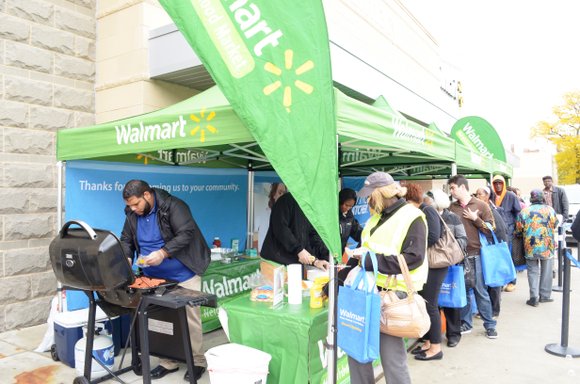 For weeks now, residents of the newly constructed, mixed-use, mixed-income complex at 47th St. and Cottage Grove Ave. in Chicago, have been moving into their new residence, a combination of condos, apartments and businesses, including a new Walmart Store.

“Creating and sustaining great neighborhoods only happens when you have strong leadership and a community willing to work together for a better future,” Mayor Emanuel said. “The Bronzeville revitalization is well underway, and it is projects like this Shops and Lofts that showcase how, when the public sector, private partners and residents work together, we can drive economic growth and create jobs in neighborhoods across the City of Chicago.”

Shops and Lofts 47 is the latest major project to open in Bronzeville as part of Chicago Neighborhoods Now, an initiative launched by Mayor Emanuel to coordinate new economic development, housing, and quality of life improvements across seven opportunity-rich sections of Chicago.

Bronzeville experienced $1.52 billion in planned and completed public and private investments that also includes the Bronzeville Artists' Lofts at 47th and Prairie Streets which opened in June 2014 and a new Mariano’s grocery store scheduled to open in 2015.

“For much of the 20th Century, 47th and Cottage Grove was the epicenter of a thriving African-American commercial district, serving communities to the north, south, east and west. We are delighted to once again see it reemerge in its historic role.” said Ald. Burns.

Development of Shops and Lofts at 47 created 150 construction jobs and will support more than 100 full-time retail jobs, according to the Mayor’s office.

The project was financed with $13 million in Tax Increment Financing (TIF) assistance for site preparation costs, a $550,000 HOME loan, a $7.8 million loan from the Chicago Housing Authority (CHA), over $600,000 in tax credit equity generated by donated land, $8.4 million in low-income housing tax equity, and up to $20 million in tax-exempt bonds. The retail component also includes $3.3 million in New Markets Tax Credits equity for the developer, beyond anchor tenant, Walmart.

“Chicago has been more than a wonderful new market for Walmart – it’s been a great new partner,” said Kaitlin Wolfe, Walmart’s Regional General Manager of small format stores for the Northeast Region. “We provide the fresh food, variety of goods and jobs that people want and in turn, residents and the City have provided us with great support and patronage. We are proud to be a part of Shops and Lofts.”

The partnership team was led by Mahogany Ventures, a joint-venture of the Skilken Company and TROY Development. Mahogany partnered with The Community Builders (TCB), one of the nation’s preeminent non-profit housing development entities, to develop and manage the 72 apartments above the retail space and another 24 units in three newly constructed adjacent buildings.