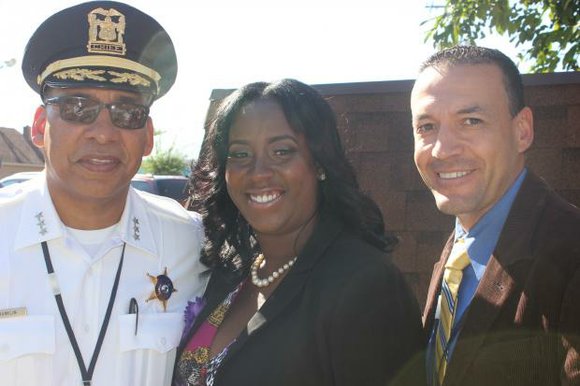 The Village of Dolton has approved the implementation of a new smartphone app that which allows local residents to help deter crime by capturing questionable and illegal activity on their smartphones and then sending it to the Dolton Police Department (DPD) anonymously. The app, I Alert U, is the first ever smartphone app of its kind to be used by a municipality or its’ law enforcement. I Alert U operates only within Dolton’s city limits as its servers are distinctly designated for Dolton residents and law enforcement.

“It’s a deterrent…if more people are aware that people can be videotaped, audio taped or photographed it will be a useful tool to help curb crime and report crime,” said Village of Dolton Deputy Chief Abraham Martinez.

The I Alert U app, which is available for a free download via iTunes and Google Play on october 17, has had its’ licensing fee paid for by an anonymous sponsor so that Dolton residents can utilize it cost free for an indefinite amount of time. The content sent through the I Alert U app will be screened as if it were a 911 call.

“The app allows residents to submit information they may visually see, they may speak it, text it and also take pictures and videos and it goes directly to a panel that our company supplies to the [Village of Dolton] police department that alerts immediately of what the message is. It gives them an anonymous way to get information to the police in real time and time stamped,” said I Alert U app developer Victoria Gatling.

“Everyone is looking for a way to reduce violence and with this in place every body, all the citizens, can use it as a formed of being armed and make a criminal think twice because he doesn’t know who has it on their phone or who sees you. Nobody wants to be caught on film. I think it’ll be very effective, it’s up to our citizens to use it and send the information in.”

Gatling will be training DPD dispatchers how to use the I Alert U system and will oversee the troubleshooting issues for I Alert U. She also told the Chicago Citizen Newspaper that she will work with dispatchers until they are comfortable and confident in their proficiency with the program.

“I have trained the dispatchers who are sitting in the actual room where the computers are located to receive the alert. They do know how to respond to what’s coming through and to dispatch a car out.”

Gatling, who has a background in marketing, contacted Dolton officials to and was eventually granted the opportunity to present the I Alert U app and its’ capabilities to them.

Gatling has also met with the Calumet City Police Department, the City of Chicago, City of Los Angeles, New York City officials, schools and universities, to discuss the app.

The creation of the app isn’t Gatling’s first experience as a developer. She has also designed a video game called Obstacles of Life. It’s a Christian based game where the player deals with life’s many trials and tribulations.

Gatling is the owner and CEO of MVG Entertainment which is based in Chicago.