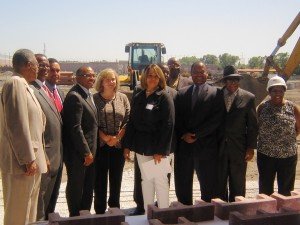 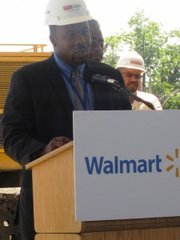 Jimmy Akintonde, president, UJAMAA Construction, Inc. addresses the audience during the Walmart groundbreaking. Akintonde's company is managing the construction of the new Walmart through a joint effort with Powers & Sons Construction. (Photo by Thelma Sardin)

Julie Murphy, senior vice president, Walmart U.S. addresses the audience during the Walmart groundbreaking on July 25. According to Murphy, the future store plays an important step in allowing Walmart to pursue additional opportunities to spur local economic development in the city of Chicago. (Photo by Thelma Sardin)

Several elected officials, dignitaries and community residents were on hand Monday afternoon for the groundbreaking of a new Walmart Supercenter in Chicagos Chatham neighborhood. The Supercenter will be the second Walmart location to open in Chicago, the first store opened on the citys Westside in the Austin neighborhood in 2006.

The future store is a part of the Chicago Community Investment Partnership, a five year plan to open several dozen Walmart stores in the city.

In addition, the plan will approximately create 10,000 jobs and 2,000 unionized construction jobs. Furthermore, the initiative will generate more than $500 million in sales and property taxes and develop charitable partnerships worth $20 million, according to a recent press release.

The Chatham Walmart Superstore is scheduled to open in spring 2012 and will be located at 83rd and Stewart.

The Chatham store is expected to create 400 jobs and provide South side residents with an additional option for cost-friendly groceries.

Ald. Brookins had been the driving force behind bringing the citys 2nd Walmart to his ward.

This day has been a long time coming its just one more step we are taking to ensure the economic vitality of West Chatham and the South side, said Ald. Brookins. This Supercenter will help residents living in nearby food deserts have easy access to reasonably priced quality producesomething that we are working very hard to ensure for ALL Chicago residents.

Walmart continues to create opportunity for minorities within the construction industry, said Akintonde. Through a close working relationship with Walmart, Alderman Brookins and the community, we have awarded 40 percent of all subcontracts on this project to M/WBE [Minority and Women-owned Business Enterprise] companies, many of whom are local contractors like ourselves with offices in close proximity to this site.

At Walmart, we continually see an opportunity to serve more customers across the United States and this is especially true in a city like Chicago where residents are underserved. [Residents] need convenient access to fresh affordable food and economic growth, said Murphy. Walmarts mission is to create jobs and to lower the cost of living for Chicago residents, she added.

Community representatives also shared their exuberance of the Walmart coming to their neighborhood.

We welcome the fact that Walmart has come into our community and given us new economic development and jobs. We want to thank Alderman Brookinsit has been a long fight, said Sandra Harrison, president, West Chatham Improvement Association.