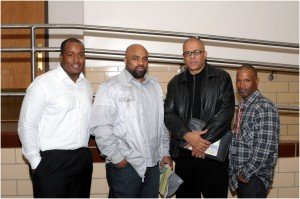 The forum is an extension of Real Men Cook Chicago held annually on Fathers Day by Real Men Charities, Inc.

The summit equipped young men with necessary tools to become successful and honored men who are making significant contributions to the community.

The day included three panel discussions and a presentation on healthy living and the need to nurture African American men and boys.

The men honored were recognized as Pillars in the Foundation of the Responsible Fatherhood Movement.

International Mens Day affirms the value of men in the lives of children, our families and our community, said Jackson. We cannot solve any of our problems unless men are at the forefront of solutions, especially in the African American community. We must reengineer what it means to be a Black man.

The CVCA event was produced by Real Men Cook co-founder Yvette Moyo Gillard. She believes the event is an avenue to highlight the significance of fatherhood.

This is a real opportunity to bring even more attention to the future of our boys and the importance of fatherhood and mentoring, said Moyo Gillard. Real Men Charities, Inc., programming and mentoring continues to bridge the gap, recognizing our stalwart male leaders who are still working and have passed on knowledge, wisdom, guidance and tradition to a new generation of males, committed young fathers and leaders with case study examples of solutions.

International Mens Day has six pillars that emphasize its purpose and goals.

International Mens Day began in 1999 in Trinidad and Tobago. The day is recognized by the United Nations and is observed in more than 50 countries. This years theme is Giving Boys the Best Possible Start in Life.