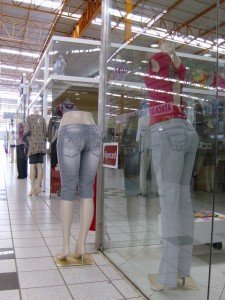 The consumer is passionate about denim, and it seems like you can't have too much. Photo by GeoNando

NEW YORK (AP) - In the '70s you had your bellbottoms and in the '80s your tight designer jeans. In the '90s, you went from distressed grungy to dressy denim, and then came the skinny-jean revolution in the 2000s.

But insiders say there isn't a defining denim trend heading into the important fall shopping season this year and that's expected to be a good thing for the women's apparel market.

It takes multiple pairs to round out your wardrobe. Skinnies and their close cousin the jegging are still going strong. There also is a more wearable interpretation out there of the high-waisted, flared-leg pant that was popular on the runway for fall, and boot-cut and boyfriend jeans have earned classic status.

The consumer is passionate about denim, and it seems like you can't have too much, says Marshal Cohen, chief industry analyst with market research firm The NPD Group.

He adds, You're going to find a denim free-for-all where anything goes. Purchases will be spread out and people will buy by brand, but not a single trend. Price point is a factor but the features people are putting a greater emphasis on is fit and brand.

Jeans already are the rare apparel item that people don't give up on when they are feeling economically squeezed, Cohen says. He puts them in the replenishment category along with socks and underwear, because people feel they are a necessary thing.

Even when they're not worn out, consumers are willing to trade up their denim, in the way they will few other things except perhaps a new smartphone or laptop, if they find a pair they think are more flattering, Cohen adds. They're always back on the quest for the perfect pair.

Sales for women's jeans had a period of brief decline in the middle of 2010, NPD reports, but ended up 2.6 percent and grew another 20 percent in the first three months of 2011. Jeggings were a juggernaut, finishing last year with an increase of 200 percent, but Cohen suspects those were more of a fad.

Fashion denim as a category is still poised for further growth, though, because people aren't married to a single look: They still have their casual and dressy pairs, black and white jeans, and those with light and dark washes. And all those silhouettes.

What denim is today has changed from just jeans. ... It's crossed the boundary of just being one thing, says Rosella Giuliani, creative director of Gap's denim collection.

Designers and celebrity stylists Emily Current and Meritt Elliot say they have noticed huge shifts in trends when it came to jeans every five years. If that's still true, we're in the middle of the anything goes trend. It's a fun point when there are lots of trends relevant at the same time, says Current. It encourages personal style and lets you play with proportion and different styles.

Elliot adds, Women can dress more appropriately for body type and lifestyle. You can ebb and flow between trends - jeggings are not for everyone, the boyfriend is not for everyone, but one of them might be for you.

In 20 years in the business, Tana Ward, chief merchandising office for American Eagle, says she has never seen this much democracy in the denim market. Consumer interest is spread almost equally among silhouettes and leg shapes, and a particular style isn't seen as something for the very young - or not so young - or the very casual versus dressy.

Today's designers and today's trends are built off inspiration from all the eras before now, Ward says. Denim retailers and manufacturers have also learned not to dictate to customers that there is one right way to be wearing their jeans, she adds. Today's shoppers aren't tied to an era. They are most interested in looking good.

Trial and error is really the best way to find flattering jeans, say the experts, but there are some style assumptions:

_High-rise, extreme flares are a perfect complement to a long, lean shape, says Ward, while curvier shapes bring a femininity to skinny jeans, especially with either a long, loose top, or fitted tank and open cardigan.

_Wide legs look best with a shorter top - not one that shows your belly - but one that hits at the top of the jeans, Ward suggests.

_Gap's Giuliani likes to see denim trousers with a blazer and heel, although she's personally wearing a lot of a slouchy skinny'' shape - a version of the skinny jean with a more relaxed cut but still a tight leg opening.

_Elliot says she's often asked, How long will skinny jeans live? and How long will the boyfriend last? My answer: They're here as long as they serve a purpose, probably forever.

_Don't limit yourself to pants, adds Current. A denim skirt or even a shirt or jacket can give off the same hip vibe that jeans have.

It's been interesting to watch denim move away into a whole category of casual fabrication, Current says.

The appeal of jeans is largely built on the durability of denim, but technology has allowed for manufacturers to make the fabric softer, more supple and stretchier, while maintaining its strength, Giuliani adds. It's also allowed for lighter weights of denim, making jeans truly a year-round look, she says.

Because jeans can be worn with pretty much anything - T-shirts, sport shirts, dress shirts, etc., - they don't fuel sales of another must-have item. Denim is universal in that it doesn't create a chain reaction to dovetail from its success, he says.

Associated Press text, photo and/or graphic material shall not be published, broadcast, rewritten for broadcast or publication or redistributed directly or indirectly in any medium. Neither these AP Materials nor any portion thereof may be stored in a computer except for personal and non-commercial use. The AP will not be held liable for any delays, inaccuracies, errors or omissions therefrom or in the transmission or delivery of all or any part thereof or for any damages arising from any of the foregoing.